The health rankings and statistics for Allegany County have been released by the County Health Rankings and Roadmaps, a national organization tracking such rankings for counties throughout the country.  Our rank for overall health outcomes improved by three positions from 22 in 2014 to 19 in 2016.  Contributing to that upward movement were a lesser percentage of the population in poor health, fewer poor physical health days and a very slight improvement in low birth weight.  In addition, the percentage of adults smoking has decreased and physical inactivity has improved.
Our clinical rankings saw the most significant improvement with our rank moving from 17th to 13th as a result of less uninsured persons, more primary care physicians, and improvement in preventable hospital stays and diabetic screenings.  There was also a reduction in children living in poverty.
Those areas where improvement is still needed include: alcohol-impaired driving deaths, which are up over last year and sexually transmitted infections, which are up over last year but well below the state’s results.  Our ranking for physical environment factors, i.e. housing, long commutes, drinking water and air pollution, is unfortunately 24 out of 24.


It is not easy to get significant movement between years, but since we started tracking such information we have seen continued improvement in a number of areas, especially those related to health status.  Such improvement is a direct result of the efforts put forth by WMHS in both our approach to value-based care delivery and our increasing role as the safety net for those in need throughout the region.

WMHS has engaged the services of Caroline Ramsey Hamilton of Risk and Security Risk Consulting to advise us on institutional security and the safety of our employees primarily related to an active shooter incident. It is our intention to improve the protection of our patients, staff and visitors against active shooters and overall workplace violence.
Caroline will be on campus in a week or so to perform an assessment of our organization and conduct onsite interviews of staff. She will work with us to do active shooter / workforce violence training for all staff and to implement a situational awareness program for the organization. Caroline brings a wealth of knowledge and experience to the engagement, especially through her past work with health systems.
WMHS is also working with area law enforcement on an active shooter drill to occur this spring. We will then be performing drills on an ongoing basis after this initial spring drill.  We want to make sure that our staff is fully aware of what to do during an active shooter incident and how to best safeguard our patients and their families as well as each other.
We have done previous safety assessments but never to this extent. Two years ago, we had a safety and security assessment performed of our campus and a number of changes were made. We added additional cameras, upgraded existing cameras with pan tilt and zoom capabilities, upgraded lighting campus wide, added a security escort program, strengthened our visitor management program after hours, added an incident notification system, placed barrier controls outside of the ED and also increased our police presence within the ED to every day.


The executive team takes the safety and security of our campus very seriously and wants to ensure that every step is taken to best protect our patients and staff.

The Robot is Coming

At our last board meeting, the WMHS Board of Directors voted to support a Finance Committee recommendation to establish a Robotic Assisted Laparoscopic Surgery (RALS) Program at our health system.

A number of our surgeons had expressed interest in the RALS program so Nancy Adams, COO / CNE, engaged the services of an independent consultant to determine if such a program would be of value to WMHS and of benefit to the patients that we serve.  After a very thorough analysis, it was recommended that we pursue the DaVinci robot. 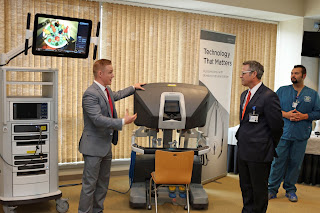 First of all, it’s not really a robot.  As you can see from the photos, the surgeon sits at the video console and operates the four arms and cameras from the console.  Through the RALS program, we can perform a number of surgical cases in our community that were previously referred to academic centers in Baltimore, DC and Pittsburgh.  In addition, all newly trained surgeons are being trained in the robotic assisted laparoscopic surgical technique. And from a patient’s perspective, they recover faster and it is safer than more traditional surgeries. 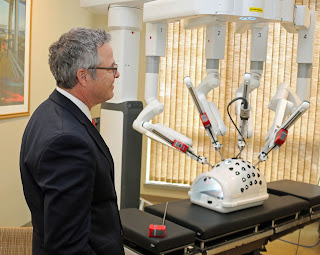 Once the DaVinci robot arrives later this month, simulation training will begin for those who have already had previous training in RALS.  A committee will be established to oversee the program, training of staff with occur, policies and procedures will be developed and the credentialing process will begin for our surgical team.

We are very fortunate to have a surgeon who has performed many cases using RALS prior to coming to WMHS, other surgeons who are currently in training on its use and a Perioperative Director who previously ran a RALS program.  We are most appreciative of our Board of Directors and Finance Committee members who supported the creation of such a program that helps to keep our health system in the forefront of our industry’s latest technological advancements. 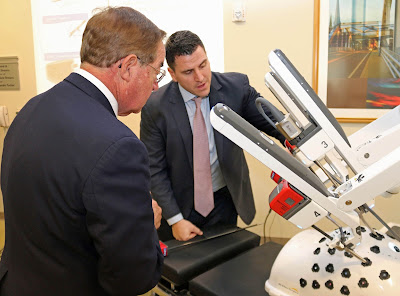