I have heard from a number of people asking why no recent blogging.  There is an easy explanation and it’s called “there were too many distractions.”

Distraction number one was the birth of my first grandchild on August 1, 2016.  Matthew wasn’t expected for another 18 days, but he arrived early weighing in at 7 lbs 14 oz and 20.5 inches long.  As soon as being notified that our daughter was in labor we packed and left for Charleston, SC.

We arrived just after he was born and then stayed to help out.  This grandparenting thing is very cool and we are so looking forward to things to come.  Right now, we get a photo and/or video each day.  That helps with the 650 mile or so separation, but as he grows and starts crawling, talking, walking, that 650 miles will get further and further away.

Distraction number two has been the finalization of our strategic plan, especially a few key components in bringing them to fruition over the last two weeks.

Distraction number three has been catching up after being out of the office for two weeks, especially unexpectedly.  We thought that we had at least two weeks before the baby was due, but he threw us a curve.

My goal is to resume blogging with some frequency next week.  Have a great weekend! 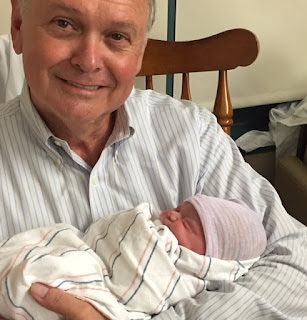