How Our Garden Grows

As you know, I contribute to a blog called Hospital Impact published by Fierce Healthcare.  I recently had the opportunity to talk about our community garden project that began last year and how it has "grown" this year.  The link to the blog is below.

However, the photo on the Fierce Healthcare website is not our garden--it's a stock photo of a generic garden.  Below are a few photos of the new orchard area that was added this year.  Planting took place during County United Way's Day of Caring and Sharing in May
. 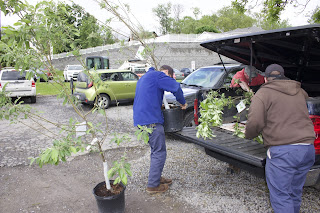 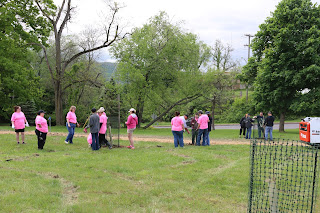 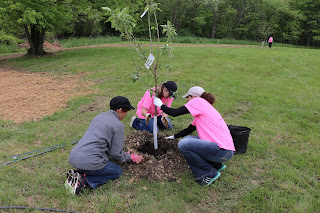 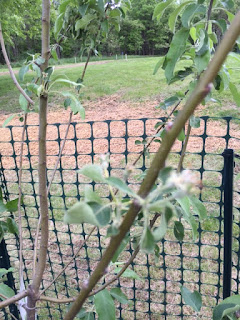 Now this is an area in which I have little expertise, but like those in Hollywood or the music industry who weigh in from time to time on political and social issues without any knowledge or expertise, I am going to offer my unsolicited personal opinion.
I don’t own an assault weapon, but my house contains a few less threatening weapons so I am a proponent of gun ownership.  However, when it comes to assault weapons, I can’t think of one good reason on God’s green earth that any individual outside of law enforcement or the military would need to possess an assault weapon.  But yet, 1.3 million such weapons are sold each year in the US.  The amount of carnage left by such weapons in the hands of radical extremists, those motivated by hatred or deranged murderers is unimaginable unless you have been directly impacted--and then I am sure that it’s surreal but in a bizarre way.
The focus needs to be on gun control legislation, which disappointedly wasn’t passed by either party yesterday in the Senate.  How embarrassing. The American people deserve far better than what we are getting from our Senators and Congressional representatives as they allow special interest and partisanship to influence their voting.  We are going to continue to allow those on terror watch lists, those with mental illness and known or suspected terrorists to buy guns?  Seriously?  They couldn’t even support expanded background checks to weed out those who are a danger to virtually everyone.
And don’t give me that we are trampling on the rights of gun owners.  If you don’t fall into one of the above categories, i.e. radical extremists or deranged murderer, then you have nothing to worry about.  You’ll get your gun, just not today.   I don’t think that our forefathers when writing the second amendment of the Constitution had weapons in mind that could mass murder its citizens in a matter of seconds.
What you don’t hear after a mass shooting like San Bernardino or Orlando is that more needs to be done to address behavioral health issues.  We already spend over $220 billion annually in the US exclusively on behavioral health, but it still isn’t enough or it isn’t being spent wisely.  Just look at the waste that occurs in the fee-for-service acute care setting with testing, retesting, unnecessary admissions, ED use for non-emergent situations and other potentially avoidable utilization.  Maybe, how those monies are being spent needs to be re-examined?  Congress needs to allow funding for gun violence research then work to appropriately apply funding that addresses behavioral health issues which can lead to gun violence.
There is so much more that needs to be done and our leaders in Washington need to do their jobs in representing the American people and not special interests on this issue.  From 1994 to 2004, there was an assault weapons ban in the US.  During that time, there was only one outlier year and that was in 1999--the year of the Columbine High School shooting.  Since the ban was allowed to expire in 2005, there have been 44 mass shootings where three or more people were killed.  During the preceding ten years during the ban, there were 17 such shootings.


In addition to the legislation and funding mentioned above, reinstituting the ban would certainly be worth a try because whatever we are doing currently, it isn’t working.

Today, I am delighted to present a blog that was written by Debbie Jenkins, our Nurse Manager for Perinatal Services.  Debbie shared this wonderful story with me about the remarkable spirit of the employees at WMHS.  I am sure you will enjoy reading it.
Barry


From Debbie Jenkins:
I wanted to share an observation of mine from a week ago—the day the storm and lightening caused a malfunction to ALL of the elevators within the main hospital.  The storm passed fairly quickly, with much wind and lightening but I guess just enough to cause problems with the elevators.  I heard comments made that the elevators were out of service and questions as to what we would do if patients were ready for discharge. (They would wait for restoration of power was my reply.)

Anyhow, just before 5 pm, I was ready to end for the day and go home.  I gathered my things and went to the stair tower that exits onto 6th floor between the north and south wings.  As I opened the door to enter the stair tower, I could see a person coming up the stairs and I just stood and held the door for him.  As that person walked out the door, I saw another person’s head emerge from the lower stair case to climb to the 6th floor.  I again waited and saw that person was carrying a cafeteria/dietary tray.  I held the door for him and was totally amazed at what I saw next.

It was like a train----one by one, people climbed the stairs.  Dietary staff, patient transport staff--all carrying patient meal trays.  One strong fellow actually carried a small cart with him; I guess to place trays on it.  He was slightly winded and quite red in the face from carrying that cart from the 2nd floor!

I have never seen anything like that in my life!  All these people providing the BEST for our patients—providing EXCELLENT SERVICE!  Up they came, one by one, all carrying a hot meal tray for the patients. Not a complaint, not a comment made.  They were doing what needed to be done at the time—providing the patients with their evening meal.  I guess there were no less than 20 or so staff members carrying trays up that stair tower at that time.  I stood in amazement as these people walked past me, each with their own tray for their own patient in need.  I did say “I can’t believe this!” to which I heard—“what else can we do—they need their meals.”

I walked down the stairs then with an elderly gentleman who had some difficulty in walking to make sure he got there safely.  I encountered visitors walking up the stairs---stopping on the landings to catch their breath and I stopped and spoke with them to make sure they were OK.  People were pleasant and not grumbling.  As the comment was made by one of the transporters carrying a tray—“we do what needs to be done" and DO  IT--DID THEY!!!!

Ultimately,  I am sure to the patients on the floors that evening, nothing was amiss.  They received their hot meal tray at the designated time.  Who would have guessed that a dedicated staff from several departments did what they did that evening.  I can’t imagine carrying trays up a flight or two—much less from 2nd floor to the 6th floor.   It was quite humbling to see this occur in front of me; and at the same time, I was very happy to be able to witness this happening.  I, like others, hear comments both positive and negative from people in the community.  I try not to dwell on the negative, but instead focus on the positive because each person has his own opinions that are not always based on facts.

I am proud to work for WMHS and have always been so.  After 41 years of service, I have seen quite a bit and heard that much more, but there is one thing I know for sure.   WMHS has some wonderful people working here;  people who ALWAYS make a difference; people who care for others and do what needs to be done!  That was never more evident than what I witnessed that day in the stair tower.  When the going gets tough---WMHS employees make it work, regardless of the situation!  These ladies and gentlemen deserve a HUGE THANKS and a BIG PAT ON THE BACK---and I extend my thanks to them!
Posted by Barry P. Ronan at 6/15/2016 No comments:

How States Are Redesigning Healthcare

I recently had the opportunity to talk with a writer who was working on an article for the Healthcare Financial Management Association (HFMA) about how states are redesigning healthcare.  The article appears in the Spring 2016 edition of HFMA's Leadership magazine and focuses on changes being made in Maryland, Arkansas, Minnesota and Oregon.

Change is definitely coming.  A link to the article is below.