Yesterday, I read about the Chamber of Commerce breakfast with the Western Maryland Legislative Delegation. I was unable to attend since I was on vacation.  During the breakfast meeting, one of the delegates commented on the opioid crisis when asked what the state was doing about it.  During his response, he said, "too many people are becoming addicted because physicians are prescribing too many opioid-based medications" and that this is a relatively new issue.

After reading the comment, I realized that not everyone really knows about what all we are doing to address this problem and that has to change. In response, over prescribing isn't a new issue; in fact, much has been done to reduce the amount of opioids being prescribed, especially here at WMHS.

The over prescribing evolved when health care regulators imposed what is known as the fifth vital sign in 2001, which was to control pain. As opioid addiction began to increase, hospitals and physicians began to move away from such requirements and worked to address pain in other ways.  Controls both self-imposed and those imposed by medical staff leadership at WMHS have been put in place in the Emergency Department, Surgery, our Pain Clinic, and in all of the WMHS clinics and practices.  Are there over prescribers out there; of course there are, but the more egregious offenders, who are very few in number, are known to law enforcement and are being closely monitored.  Dr. Jerry Goldstein, WMHS Chief Medical Officer, is having a list compiled through the Maryland state registry that monitors opioid prescribing, as well as through other sources, of those independent physicians and dentists who are considered to be prescribing beyond newly established standards.  Once that list is completed, Dr. Goldstein will meet with each practitioner individually.

Recognizing that this crisis was only going to get worse, the Western Maryland Health System convened its first community-wide meeting to address the opioid / heroin epidemic in our area in August.  Representatives from law enforcement, the State's Attorney's office, the Health Department, the Finan Center, the EMS community and WMHS met for nearly two hours to learn from each other as to the challenges that we each face and to plan the next steps needed to address the many issues.

It is interesting to note that during that meeting, one representative commented that because there are so many controls on the prescribing of opioids by doctors and the hospital, those who were addicted to painkillers have become our newest heroin addicts.

The meeting was an open and frank discussion.  It was so well received that a second meeting was held in December and with representatives from the dental community, the Allegany County Board of Education, the Greater Cumberland Committee (TGCC) and local pharmacists being invited to join the group.  A third meeting has been scheduled for February.

During the December meeting, we talked about many topics, including:

There has been a great deal of interest as well as action that continues to occur throughout our region on this subject.  After reading yesterday's Chamber breakfast comment, an invitation to the Western Maryland Legislative Delegation to attend our February meeting is in order.  As our progress evolves, there will be more to follow.

Once again, it's been a while since my last blog, but I have been exceedingly busy in both my personal and professional lives.  I have taken some time off earlier than usual to spent it with family for Christmas so I have found a few minutes to blog.

As for the generosity, last Friday, my daughter Lauren, who does market intelligence for the Pulte Group (home builders), turned over a newly built and furnished home in Summerville, SC, to a Gold Star family.  Lauren coordinated the entire project so we promised to be there for the release ceremony.  What an amazing gift to this family of a Navy Seal who was killed in action.  In addition to fully furnishing the home, they raised enough money for the taxes, insurance and utilities for at least three years.  A Charleston bar owner even donated a new tricked out golf cart for the surviving mother and daughter to travel around the neighborhood.  The Coastal Carolina Pulte Group pretty much does a home a year for a veteran wounded in combat, but this was a first for a Gold Star family.  There were dozens of subcontractors who donated their time and materials.  Big screen TVs and audio equipment were donated for virtually every room; Lauren had landscapers who were fighting over who was going to landscape around the home.  People are truly amazing and it was a very special day for me.

As many of you are aware, my son-in-law Terrell's cancer is back in both his leg and his lungs; second time this year and third time since February of 2014 in his leg, but the first time in the lungs.  He started chemotherapy in October and will be heading to MD Anderson in Houston the day after Christmas for a five-day visit.  Because of his chemotherapy, my son-in-law will be severely immunocompromised so routine air travel wasn't the best option.  Last month, I reached out to friends and colleagues seeking a private jet / airplane to take them to Houston with the full intention to cover all of the expenses.  Not only did I have an offer within five minutes of the Facebook ask, but the entire trip has been donated by this friend. I continue to be amazed at the kindness of people.

This takes me to the Western Maryland Health System, where generosity abounds.  On the Saturday before Thanksgiving, the Health System, along several partners provided a complete Thanksgiving meal to over 2500 people who most likely wouldn't have had much to eat let alone a traditional Thanksgiving dinner.  They were invited to the Regional Medical Center for dinner with transportation being provided if needed.  If you were a shut-in and unable to come to us, we came to you.  Meals were also delivered to homes throughout the communities we serve.  It was an amazing event coordinated by our own Jo Wilson, who is by far one of the kindest, most caring people that I have ever met, and she was joined by a wonderful group of volunteers who were mostly WMHS employees and their families.
Which brings me to Christmas.  As I was preparing to head out for Christmas, I watched dozens of departments and patient units throughout the hospital prepare their many gifts for the Christmas families that they sponsored this year.  I saw bikes, games, clothing, toys, coats, blankets and gift cards being wrapped in spare offices and conference rooms.  Carts of gifts were being transported to waiting cars for delivery to homes, churches, the YMCA, nursing homes and the rescue mission so those less fortunate could experience Christmas like the rest of us.  I am honored to work with such wonderful people each day.

As I noted above, the year 2016 was a busy one and, for the most part, one that I would like to forget.  In addition, to Terrell's cancer returning, my mother-in-law was diagnosed with Stage 4 ovarian cancer in February, my own mother passed away in June and both of our six-year-old cocker spaniels died with a few months of each other; but there were bright spots as well.  The love, kindness and generosity of the people mentioned above as well as those who have been there to support me and my family throughout this year with so many personal challenges.  Undoubtedly, the brightest spot of all has been the birth of my first grandchild, Matthew Ronan Jackson.  (Photos below.)  What Jessica and Terrell went through to have Matthew and then to bring into this world this sweet, little child who is always smiling and laughing (at least when I am around). God knew that we needed something good this year and he certainly delivered.

Now for 2017, I am hopeful, as is Terrell, that God is ready to deliver again.  Have a Blessed Christmas and a very Happy New Year. 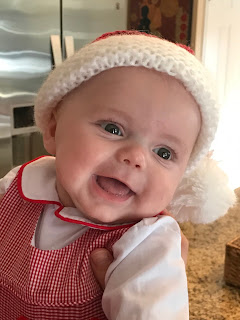 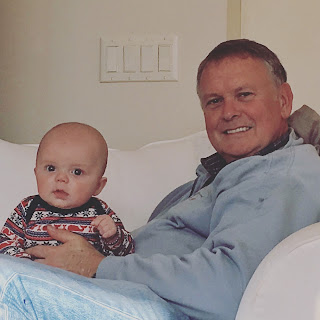